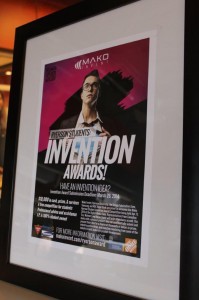 George Brown and MAKO Invent are thrilled to announce the first ever annual MAKO @GeorgeBrown Invention Awards. Over $10,000 in cash prizes and in-kind services will be awarded to the top three applicants, which will be announced at the awards ceremony on April 10, 2015 held in conjunction with the Final Project Showcase Event for […]